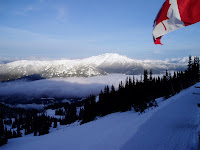 Canada looks a beautiful, friendly country, and all the Canadians I’ve met (and shared rooms with on my travels) have been lovely! I read all the Anne of Green Gables novels when I was younger, and have always wanted to go and see Prince Edward Island… also want to get the train across to the Rockies, see the bright lights of Toronto, ski in Banff, and just take in the beautiful landscapes… while trying out some daft activities and taking a million photos no doubt, see: http://www.travelblog.org/Bloggers/drbexl/ for evidence of that!

Publish my PhD as a Book
I will never feel like I’ve finished my PhD until I see my name on the spine of a book in the bookstores. There’s plenty of interesting material in my PhD (see http://www.ww2poster.co.uk), lots of interest in it (see the recent furore over ‘Keep Calm and Carry On’: http://drbexl.blogspot.com/2009/03/keep-calm-and-carry-on.html). Originally I intended to call my book “It’s Up To You” after a poster which takes the Kitchener “Your Country Needs You” as a design inspiration, but now Keep Calm and Carry On seems far more appropriate, as I’m particularly interested in why such images still resonate over 60 years later). At my PhD viva we spent most of the time discussing turning the thesis into a book (would probably take around a year on top of a steady job), and the book proposal is in process… meantime, travelling and job-seeking have rather taken away from that!

Visit Israel
OK, so it’s another “visit somewhere”, as the remainder may be… I want to take a trip to Israel with http://www.oakhall.co.uk. I know loads of people who’ve been and they all say the same thing… really tiring, but completely awesome and inspiring (well, that describes pretty much any Oak Hall trip that I’ve been on!)

See a Formula 1 Race live
I used to follow Formula 1 avidly, watching heats, races, repeats, highlights – you name it, and reading all the magazines. I then realised how much of my life this was taking up and pretty much went cold turkey. However, getting to know Emma @ Manchester we chatted about Formula 1 lots, and I would still like to go to see a live race… not sure where yet. I have stood on the starting grid and podium at Albert Park in Australia, and may watch some of this weekend’s… if only to remind me of the time I spent in Australia (and there’s somewhere else to go back to!)… I had a day’s race car driving experience: http://www.bex-lewis.co.uk/career/big_achievements/drivingexperience.htm, whic was great… bring on the skid-pan racing next!

Run the London or New York Marathon
I’ve done a couple of 10ks, and would even need to build back up to that length at the moment, but I’ve always wanted to run the London Marathon (although sometimes I think the New York would suit my traveller mind more). I have actually completed a full-length marathon event: http://www.bex-lewis.co.uk/career/big_achievements/moonwalk.htm, which is maybe almost harder than a daytime marathon, but still, running a marathon beckons…