On the evening of Wednesday 16th December, I attended the Nigerian High Commission for the launch of Dr Oluyinka Esan’s book Nigerian Television: Fifty Years of Television in Africa, which places a small segment of her doctoral thesis within easier reach of the public. Oluyinka doesn’t have particular contacts within the Embassy, she stressed, but felt that her work was not just her story to tell, but was very much a social history of Nigeria. Those in the Embassy were so keen that they jumped upon the chance to host the event, and invited many dignitaries, with the appropriate protocol followed throughout the ceremony (it was very much a ceremony, with the National Anthem played twice). After were some African inspired nibbles, and a chance for book-signings and networking! 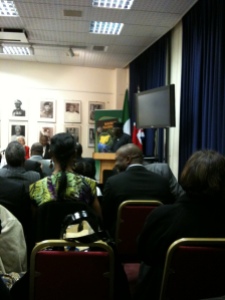 Oluyinka Esan is a Lecturer in Media and Film at the University of Winchester.

“Past efforts at documenting the general history of television have tended to focus mainly on Western examples, often superficially aggregating the African experiences, when they are featured at all. A search for literature on the subject yields sparse results thus creating the impression of a void in this vast continent. This ebook offers invaluably detailed information on Nigerian television as an example of the industry in Africa. The focus on Nigeria is justified as the nation boasts the first TV station in Africa, and the largest TV network on the continent. Nigerian Television: Fifty Years of Television in Africa is both timely and strategic as Nigeria celebrates the golden jubilee of its television industry (1959 to 2009). Appreciating the challenges, role and prospects of the industry was at the very core of the author’s raison d’être for writing the text. The research effort informing the ebook has sought to capture factors shaping the encoding practices of Nigerian television in its five decades of operations.

The ebook is primarily an account collated from a range of organisational sources using ethnographic techniques. It examines the pioneering efforts, offering an insight into the use of television as a tool of governance. It shows how central television has been in this process thus revising previous views which, in their celebration of radio as the medium for social mobilisation at the grassroots, have understated the profile of television.

This is an account of a significant aspect of cultural life which should facilitate an understanding of the role of television as an important medium in the politics of a nation; especially one with such diverse identity groups and cultures as Nigeria” (Lybrary)

Forum Entry on 50 Years in Nigerian Television, by one who was there.

Mass Communications Academic, @MMUBS. British Home Front Propaganda posters as researched for a PhD completed 2004. In 1997, unwittingly wrote the first history of the Keep Calm and Carry On poster, which she now follows with interest.

Finally made these pizza wheels - not tasted one y

Went for a little walk - back to nice card from my

Ah they got me good. @katiegallagheruk and @lectur

Today. Got up, got dressed, face on!! Chat with @s

Made it out of the door despite pretty much no sle

My eyes are rather sore, but I have good people ar

Excellent to have #sociallydistanced garden chat a

Made it out the door - woo hoo - mostly slumped to

Home 🙂 Who knew that lying still could leave you

Just waiting to be told that my scans were all com

It’s been a tad of a hot day! Managed to make a

Not the longest of walks. Strava bailed again ...

A little walk ... Strava didn’t work again but a

Celebrating Jane’s new job. And my hair is drivi